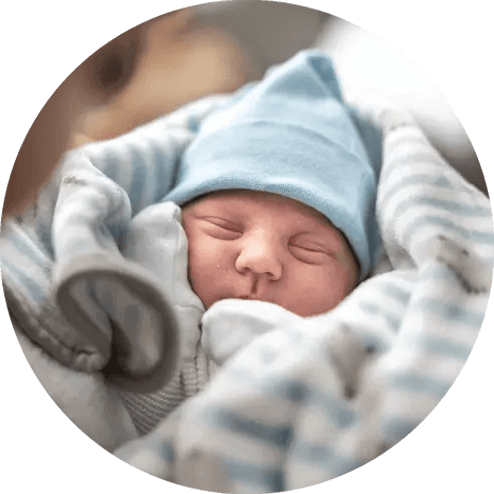 Hypoxic Ischemic Encephalopathy (HIE), also known as birth asphyxia, is a devastating condition diagnosed at birth. It is caused by various triggers, which can include a tight or knotted nuchal cord, or a placental rupture. When a baby has HIE, blood flow to the brain is significantly reduced, causing a stroke-like syndrome. The lack of blood flow to a developing brain can cause life-long permanent damage, or death.

Therapeutic interventions for HIE are extremely limited. Using cooling caps or blankets, babies are placed in a hypothermic (cold) state for several days, to lower their metabolic rate and give the brain time to recover from the hypoxic event. While hypothermia provides a slight decrease in mortality, its impact on neurocognitive outcomes is unclear. The remaining unmet need is significant.

In the US, HIE affects nearly 1 baby every hour. Globally, HIE is implicated in over 23% of all newborn deaths. It is especially prevalent in countries with developing medical systems.

RLS-0071, ReAlta’s lead compound, utilizes a dual-targeting mechanism that is uniquely and highly suited for development as a therapy for HIE. In an animal model, RLS-0071 has shown a dramatic decrease in brain infarction, and an increase in brain function, and has the potential to be disease-modifying as evidenced by histology, neuroimaging (i.e., MRI), and neurocognitive outcomes data.

As seen below, there is little visible difference between the normal rat pup brain and the brain of a rat treated with RLS-0071, while untreated rats and rats treated with hypothermia show large areas of dead brain tissue (white). These MRI findings were recently published in a PLoS article, which can be found at this link.

ReAlta has partnered with Hope for HIE, a leading organization providing resources for awareness, education, advocacy, and support surrounding neonatal and pediatric HIE. Serving a worldwide community, the organization provides a comprehensive support network for families, collaborates with research and medical professionals, and leads advocacy initiatives to reduce incidence and increase quality of life for those affected by HIE. Hope for HIE is a 501(c)3 non-profit. For more information, please visit www.hopeforhie.org.

ReAlta, as a platinum level partner, is sponsoring the development of educational resources that will help Hope for HIE’s community better understand the impacts of HIE in childhood development.

Platelet Refractoriness is common in cancer patients who receive frequent platelet transfusions and increases the risk of life-threatening hemorrhage.